Expect to find a beautiful oyster bar that showcases fresh oysters sourced from around the globe. We pride ourselves on the variety of seafood that we source from the pristine waters from the North Atlantic to the South Pacific. Whether you join us for an intimate dinner or business lunch, a seafood tower or a handcrafted cocktail, Chef Daniel Boulud’s team has been welcoming guests to Marina Bay Sands since 2010. 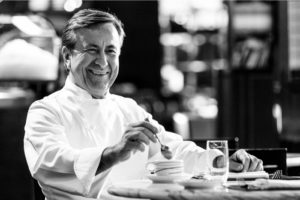 Daniel Boulud is Chef-Partner of DB Bistro and Oyster Bar. He is considered one of America’s leading culinary authorities and has become renowned for the contemporary appeal he adds to soulful French cusine. Daniel was raised on his family’s farm in the village of Saint-Pierre-de-Chandieu outside Lyon, France, but has called New York City his home since 1983.

In 2015, the World’s 50 Best Restaurants awarded Boulud its Lifetime Achievement Award for his success as a restaurateur, businessman, and ‘chef who is revered as one of the world’s finest. Chef Boulud’s culinary accolades include James Beard Foundation awards for “Outstanding Restaurateur”, “Best Chef of New York City” and “Outstanding Chef of the Year”. In addition, Restaurant Daniel was also cited as one of the 10 best restaurants in the world by the International Herald Tribune and has earned multiple Michelin stars and Wine Spectator’s “Grand Award”. Chef Boulud has also authored nine books and created three seasons of the television series After Hours with Daniel. 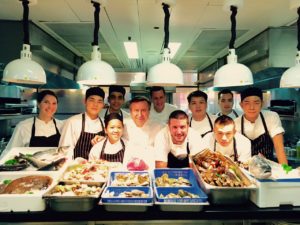 Db Bistro & Oyster Bar is composed of over 100 professionals from Singapore and around the world who bring their talents and passion to curating a unique experience for each and every guest. Our team is committed to bringing the culture of excellence in cuisine and service as exemplified by Chef Daniel Boulud.  The majority of our team has been working at db Bistro & Oyster bar since its opening 2010, coinciding with the opening of Marina Bay Sands itself. Under the leadership of Chef Jonathan Kinsella and GM Balthazar Pellissier, our team has worked to create a welcoming atmosphere and warm hospitality that complements our extensive menu of bistro specialties and fresh seafood and oysters from around the world. We strive to provide a welcoming and elegant service in a timeless setting intended to make you feel at ease.